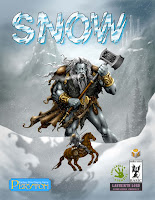 So, I just released Snow, a multi-system adventure (Peryton RPG, Basic Fantasy, Labyrinth Lord, and Tunnels & Trolls), through Peryton Publishing. While I plan to do more one-dollar multi-system adventures like this one, I'm wistfully daydreaming about how nice it would be to do some that aren't. It's not that it's hard, exactly. It's just that it bogs down the process more than I expected.

I came up with a unified stat block for the three D&D-based games, and I threw in T&T (sidebarishly) just because it's easy and, really, such a joy to stat up critters for that game. I was kind of proud of the unified stat block. It's still pretty compact because of the overlap between the three related systems, and it supplies the information you need for any of them. Special qualities are all moved to the text so you don't have to worry about references that aren't there in whichever system you're playing it with. It takes very little extra effort to do stat blocks this way. It's still much easier, for example, than doing a complete stat block for a 3rd Edition D&D monster.

So far, so good. Then you get into spell references. Mostly this is okay, but some spells have different names because of the OSR's habit of converting any altered names back into High Gygaxian. And, of course, they all have slightly different (not much, but just enough) spell lists anyway, so you have to make sure the one you want to use exists in all of them. Magic items... well, I try to come up with new ones for published adventures anyway, so it's no big deal to ensure from the start that they're compatible. NPC's can be problematic. If I want to use a new class from my game, I can't just say that the character is a 7th level mystic and expect that to mean anything to the guy playing Labyrinth Lord. My solution is the same as the one I used in Pits of Paneris, stat up any questionable NPCs as if they were unique monsters. It works, but it makes "eh, maybe this one should just be a lizard man" awfully tempting sometimes.

Okay, so, for all that whining, I really think the process is going to work out well. I'm much happier doing Peryton + Old School than I was doing Peryton + Pathfinder, despite the differences in terminology. I'm already well into the sequel. It does seem to get easier as I go, although I may end up having to switch over to Gen Con prep mode before I finish it, because I've got so much to do this year.